Is Jeb’s logo a gaffe? Is it an oversight? Is it defiant? Or is it clever?

This week Jeb Bush officially entered the 2016 race for President. One of the unexpected pieces of media coverage and trends on social media was the debate over whether Jeb’s logo was outdated and lacked imagination. With the tens of millions of dollars in the bank, deploying latest technology and assembling the best advisors a candidate for President could ever hope for, folks are scratching their heads over Jeb’s campaign logo.

So is the logo a thumbs up or down?

Let’s answer the question by simply understanding the purpose of a logo. A logo is an ancient form of inspiring, impressing and imprinting audiences. Hieroglyphics, paintings on cave walls and family coat-of-arms are early examples. Today say the words Apple, Nike, Target, Walmart, Microsoft and Coke, and you immediately see these company logos and vice versa.

Let’s take it one step further. Of all of the GOP presidential contenders, other than Jeb, who can get away with using their first name? Donald Trump would be close second, but it’s his surname.

Advantage Jeb. We as a society relate and identify to one name fits all: Madonna, Beyoncé, the Boss, Hillary, Obama, the Gipper, FDR, JFK, and Ike (“I Like Ike” still one of the best campaign slogans ever).

It’s already a winning brand and logo, so why indeed change it. So here are my reasons why the Jeb logo is the right call:

There are detractors of course who would say that an old logo is fitting for a politician who is past his prime. I get that. Still, here we are days after Jeb’s official announcement. Everyone is referring to him as Jeb. See what’s happening here?

Jeb and his logo are poised to go deep into the GOP primary and chances are pretty good that Jeb will win both the primary and presidential elections. If that happens, Jeb will join Ike as a presidential brand and logo that won the favor of the voters.

For the last 12 years, corporate leaders from around the country have retained Patrick for his strategic counsel, campaign leadership and organizational solutions.

For more information go to www.PatrickSlevin.com.

Or contact Patrick directly to schedule an exploratory, confidential call at 850.597.0423 or pslevin68@gmail.com. 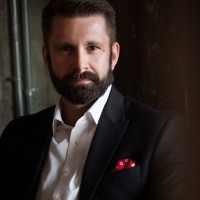